The region of Vila Isabel is a microcosm of Rio de Janeiro: all trends mingle with attempts to build a carioca tradition that has been reinventing itself throughout the last century: samba, poetry, France and Brazil, the university, the land of the laborer, Mangueira and Morro dos Macacos. It was one of the areas of the former Engenho Velho, which spread its limits from the city center up until the regions of Engenho Novo and Lins. After the work of Barão de Drummond, it became the first planned neighborhood of the city, in 1872. The town still has a spell without farofa : it joins its musical sidewalks with the energy of the students (there, in Vila Isabel, whoever is a graduate is not afraid of the expert ), and the traditions and renewal of communities that belong to Vila Isabel. The neighborhood is worth visiting, no matter whether you are an intellectual, a trickster, an expert or just a curious person. It is a neighborhood with the name of a princess and a soul that reveals the purest of carioca’s mixture.

Recently built to honor one of the leading poets of Vila, it seeks to reproduce one of his most famous songs, “Conversas de Botequim”.

UERJ's building represents Rio de Janeiro at its worst. Designed to be a hospital, its works were abandoned and were later taken over by people expelled from the city center, constituting the “favela do esqueleto”. It remained so, until Carlos Lacerda’s government, when the population was driven out of the premises and Rio de Janeiro’s State University was built in its place.

Opening Hours: Monday to Friday from 8am to 5pm 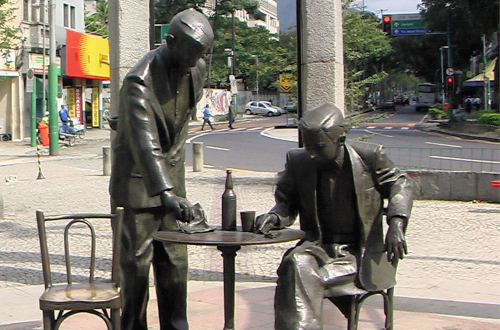 Named after Rio’s former mayor, Pedro Ernesto Baptista, this hospital was founded 50 years ago, completing its golden jubilee recently. It is bound to the university and serves as UERJ’s hospital.

On August 19, 1900, the chapel Nossa Senhora da Conceição de Lourdes was set apart from the parish São Francisco Xavier . Thus, the parish of Vila Isabel came to be, by act of the Archbishop Cardinal Dom Joaquim Arcoverde de Albuquerque Cavalcanti. On February 15, 1902, the Confraternity of Nossa Senhora de Lourdes becomes a member of the Confraternity of Our Lady of Lourdes in France.

Opening Hours: 2a a 6a deMonday to Friday from 1pm to 6pm (the schedules of masses vary from 7am to 8pm – see more on the website)

It all started 40 years ago. Petisco da Vila, today a home of history and tradition, emerged from a simple pub. Located on 28 de Setembro St. at the corner of Visconde de Abaeté, this site is one of the most traditional birthplaces of samba bars.

Opening Hours: Everyday from 11am to 2am

Immortalized by Noel Rosa, the manufacturing hub of Andaraí and Vila Isabel was very important to the city during the 1920s and 1960s. Due to the factory setting, there are still dozens of houses that constitute its workers village. The plant and the houses in front and around it have been part of the cultural environment protection area since 1993.

João Batista Viana Drummond acquired the lands of Imperial Quinta do Macaco, a valley next to Morro dos Macacos, from the Princess Isabel, for only 120 bucks because he was friends with D. Pedro II. Since he had been to Paris at that time, he was impressed with the architecture of the French town. He, then, decided to urbanize the area in the style of a French quarter. In addition, he even opened a boulevard referring to the Free Womb Law.

João Batista Viana Drummond was very fond of animals and had sheltered several specimens. He had a legal permission to import them and , thus, Rio’s first zoo came to be, in Vila Isabel, in 1888.

Opening Hours: Everyday from 8am to 5pm

A number of 259 songs in seven years. All very good songs, some of them, masterpieces. Many were very successful, animated carnivals and played constantly on the radio. Noel Rosa (1910-1937), a sleazy, womanizing bohemian, born in Vila Isabel by a forceps that marked his chin, was a genius. He raised the samba lyrics to the stage of poetry – satirical, loving and social poetry.

! My last name is Vila

Martinho José Ferreira’s stage name, Martinho da Vila, came from the historical relationship between the artist, the samba school Unidos de Vila Isabel and samba. Involved in the school’s plots, he made the samba Kizomba , “A Festa da Raça”, and granted Vila Isabel the title of Carnival champion of the special group of samba schools in 1988, a fact that would repeat itself in 2009 and 2013.

Did you know that “Jogo do Bicho” has already been a legal game and that it had its beginning in Vila Isabel? During the Empire, Barão de Drummond , who was fond of animals, built the first zoo of the city, supported by the Emperor. However, after the declaration of the Republic, the subsided money was taken away from the place , In order to keep the zoo running, he encouraged gambling , which ended up becoming a major trend in Rio de Janeiro: “Jogo do Bicho”, a gambling game with daily draws in tens, representing animals. The zoo was later transferred and now the site houses the park "Recôncavo do Trovador".

The neighborhood has plenty of references to the abolitionist movement, starting with its name, a tribute to Princess Isabel. The village that entrepreneur Drummond had designed in 1872, which was named Boulevard 28 de Setembro, had straight streets and a wide promenade, celebrating the date of the signature of the Free Womb Law in 1871. The second most important venue was called Teodoro da Silva, also in honor of da Silva, who participated in the signing of the law.

All it takes to get good Brazilian music scores is a stroll in the neighborhood of Vila Isabel, at Rua 28 de setembro. The sheets of 20 songs, considered by singer and researcher Almirante the most significant of MPB, are designed in stone on the sidewalks of the neighborhood. This ornament is a product of the joint effort of the local people and was designed by the Lions Club of Vila Isabel in 1964. Among the scores found, are those referring to songs like “Aquarela do Brasil” by Ary Barroso; “Cidade Maravilhosa” by André Filho; “Feitiço de Vila Isabel” by Noel Rosa and Vadico and “Ô Abre Alas” by Chiquinha Gonzaga.

The affection of the locals to the samba school is so great that after it lost its court in 1988, Unidos da Vila Isabel school held its rehearsals on the street and won its first championship in Carnival’s special group. Now, the school has an upgraded court with a capacity for 11 000 people in 4 thousand square meters of built area. Great artists and bands belonging to the project “Casa de Bamba” use to perform on the site.

This restaurant offers seafood portions for up to five people. Its motto is efficiency, speed and abundance.

Next to the park Recanto do Trovador, the Olympic Village is settled on the site of Vila Isabel’s old zoo and offers a number of recreational activities to about 2,500 people. Among them are initiation and training in various sports, with rooms that are used for dance, fights and figure skating, besides an athletic track, which consists of four lanes 200 meters long, with a straight lane for triple jumps.

Opened in 1997, the theatre Odylo Costa Filho has a capacity for 1,106 spectators. Having magnificent acoustics and excellent stage size, the theater is acclaimed for having perfect visibility from anywhere in the audience. Moreover, it has technical qualities that grant it one of the best scenic areas of Rio de Janeiro.