In Santa Teresa one can see the beauty of nineteenth century buildings, century in which the carioca elite climbed up the hill to avoid the yellow fever epidemic that took over the city. In 1850 the elite went up the hill to benefit from the fresh air of the region, strategically located close to the Guanabara Bay and accessed either by downtown, north or south zones (via Lapa, Glória, Laranjeiras, Cosme Velho, Catumbi or Rio Comprido). Up until these days the neighborhood is structured on a single, long road without traffic signs or gas stations (somewhat isolated from its neighbors), with cobblestone and pé de moleque pavement and centenary lanterns, "something like Paraty and the colonial cities of Minas Gerais," as the writer Caio Fernando de Abreu would say.

Besides Caio F., the neighborhood was home to other illustrious residentes such as Paschoal Segreto, Laurinda Santos Lobo, Manuel Bandeira, Djanira, Nise da Silveira, counterculture artists such as the Dzi Croquettes and many others. Santa Teresa’s artistic calling remains until these days in events such as Arte de Portas Abertas and the bohemia of its pubs in old fashioned style around squares like Largo das Neves, which seems frozen in time. The neighborhood was the only place in town that kept the cable car as a means of transportation until the twenty-first century. Though it is currently more used for touristic purposes, the tram holds its charm when sliding through the old aquedut of the city. 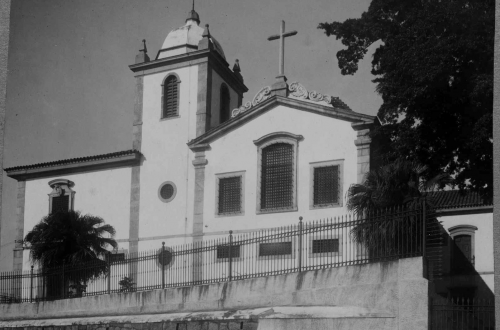 A tribute to the illustrious resident of the neighborhood, the Baron of Curvelo, the square is the first tram stop and is still a meeting place for locals, who chat and play chess in the late afternoon. At Carnival, it gives way to the Carmelitas street group and in the rest of the year, it hosts meetings of independent bands and craftsmen. In Largo do Curvelo one can find “casa navio” (ship home), a modern building of the 30s, inspired by the deck of a vessel.

Along with new steel structures, the ruins of the house which has belonged to the maecenas Laurinda Santos Lobo gained a new composition. When walking through the interior of the building, where the walls are apparent in brickwork, one can see clearly the construction method of houses from the early twentieth century. However, the big attraction is the observation deck with sweeping views of the city and the Guanabara Bay, the place where its former owner promoted soirees with personalities of the Modernist movement.

Next to Parque das Ruínas, the museum has been one of the old residences of Raymundo Ottoni de Castro Maya and now it houses numerous works of art that belonged to the successful businessman and collector, including nearly 500 original Jean-Baptiste Debret. It is a classic modernist house, made of right angles in cubist style, with beautiful gardens and a beautiful view of the city center. 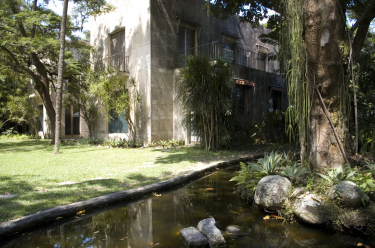 The convent stands on the grounds of a chapel erected to Nossa Senhora do Desterro and gave name to the neighborhood – until then, the surrounding area was known as Morro do Desterro. It was the first female convent in Brazil, built in 1750 by Governor Gomes Freire de Andrade, the Bobadela Conde, on the land donated to the nuns Barefoot Carmelitas, who were proteted by him. In the courtyard garden there is a statue of Santa Teresa with many rose bushes, which certainly alludes to the famous Carmelite nun of the nineteenth century, Teresinha do Menino Jesus

The staircase connects Largo da Lapa to the part of Santa Teresa next to the convent of the Carmelites. Decorated with numerous tiles by Chilean artist Jorge Selarón it became a tourist attraction in Rio de Janeiro and draws many visitors. In fact, it is a gateway to the neighborhood, called Rua Manuel Carneiro, with houses on both sides. It is so steep that it is only possible to pedestrian circulation. 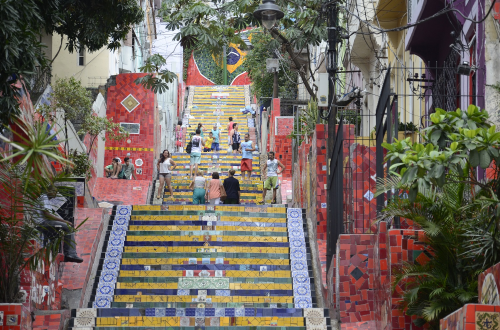 Devoted to concert music, the hall is located in a building constructed in the late nineteenth century, in Largo da Lapa, and since 1965 it has been one of the most prestigious houses of erudite classical and chamber music performances. Before being renovated to house the concert halls, the building housed an old and famous hotel and also a cinema. The Grand Hotel, built in 1896, appears in many photos of old Rio, in the early twentieth century.

! From green to yellow

Before becoming a symbol of Santa Teresa, the yellow cable car had been painted green. The color change met the requests of residents who claimed that the tram "disappeared" amid the green surroundings. The tram almost vanished in fact in the 60s, when the system was disconnected in the rest of the city. The neighborhood has become the only one in Rio de Janeiro to have trams in its streets, a point of resistance as in the saying “tudo na vida é passageiro, menos o condutor e o motorneiro” "everything in life is fleeting (in portuguese “passenger”), except the conductor and the motorman." 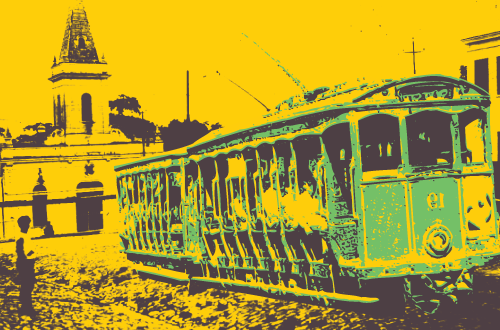 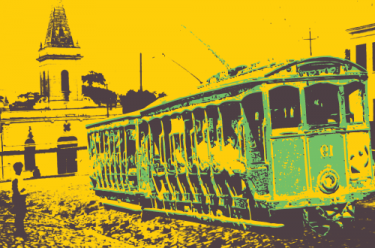 Santa Teresa’s Carnival calling began in the 90s, when an irreverent group decided to honor the nuns living in the cloister of the Santa Teresa Convent with the street Carnival group called Carmelitas. Rumor has it that one of the nuns climbed the walls of the convent and joined the group. And, in solidarity, they all adopted the veil to help her remain in disguise. The plot was formed. Then the itinerary: every Friday before Carnival, the group goes in one direction and on Tuesday they come back in the opposite direction, to help the return of the nun to her prayers. 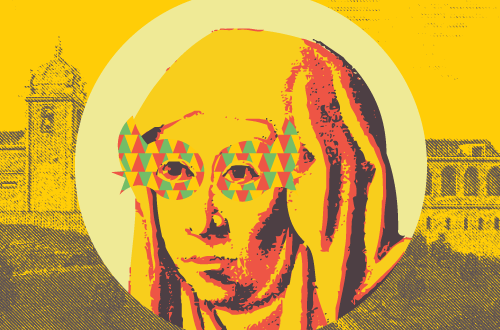 If in the 20s Santa Teresa was the meeting point of Rio’s Modernism, the 70s brought a cultural knockout to the neighborhood that is a tangle of hills and curves. With this background, a group that truly represents the counterculture movement chose the neighborhood to live in community: Dzi Croquettes, thirteen bearded men who dressed in women’s clothes to sing and dance on stage, transgressing the mainstream and openly mocking the political, behavioral and sexual principles of that time. 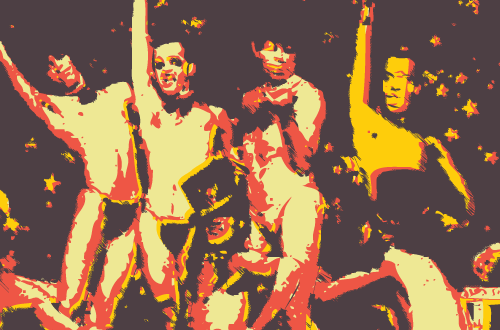 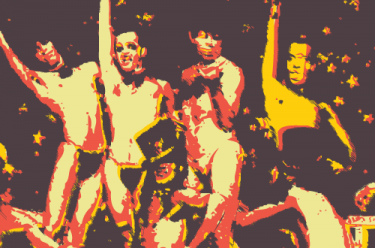 A farm built around 1860, the place was the last house where Benjamin Constant lived. He moved to the house a year before his death, in 1890. Nowadays, it preserves the memory of the founder of the Republic – title awarded to Benjamin at the time. As a highlight there is a tree-filled area of over 10,000 square meters surrounding the house, which is part of the Environmental Protection Area (APA) of Santa Teresa since 1985.

Opening hours: Gardens: Everyday from 8 am to 5pm
Museum: wednesday to friday, 10am to 5pm
Saturday, sunday and holidays from 1pm to 5pm

Located on top of the neighborhood it was built in 1879 by the Portuguese commendatore Antônio Valentim and remodeled in the '30s by his son, architect and set designer Fernando Valentim, who divided in apartments the five-story building with airs of a fortress. Mixing architectural styles with striking gothic influence and declared a Municipal Heritage in the 90s, the building is one of the few little castles that still remain in the urban settings of the city. Currently, Antônio's grandson receives tourists in a family hosting system.

The end of the tram line is a square surrounded by big houses and townhouses of the 30s, some of them were turned into bars, and maintain throughout the year a diverse cultural program. During Carnival, the square gives way to the street group called Céu da Terra. Formerly known as Chácara Francisco Ferreira das Neves, it was opened in 1852 by the Commander Francisco Ferreira das Neves, who donated the image and built from 1854 to 1860 the chapel of N. Sra. Das Neves, in neo-Gothic style.

The renovated townhouse at the staircase Selarón turned into a place for the work of theater groups and is now home to three resident theater companies: a Cia dos Atores, Os dezequilibrados and a Pangeia cia.deteatro. In its programming, there are shows at popular prices along with periodic and free workshops.

Armazém São Thiago, best known as Bar do Gomes, is located for over 90 years in Santa Teresa and has already been a warehouse. It still holds furniture from the early last century and serves appetizers such as beef croquettes, pies, codfish balls and portions of lupins and olives, as well as beer and cachaça.

Opening hours: Monday to Saturday, from 11am to midnight
Sunday, from Midday to 10pm

For over a decade this Baiana from Salvador installs her colorful board in Almirante Alexandrino st. and has become an attraction of the neighborhood. She offers acarajés, abarás, couscous, cassava cakes, coconut sweets, pé de moleque and flowers of the season.

Address: 1458, Almirante Alexandrino st. (in front of the post office)

Opening hours: Thursday to Sunday, from 5pm to 10pm 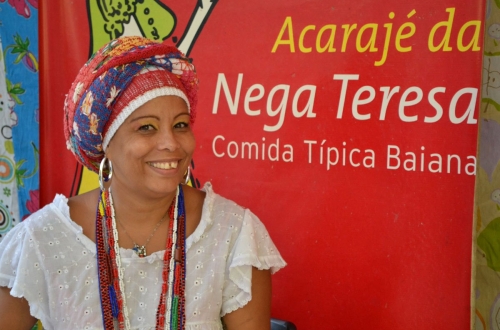